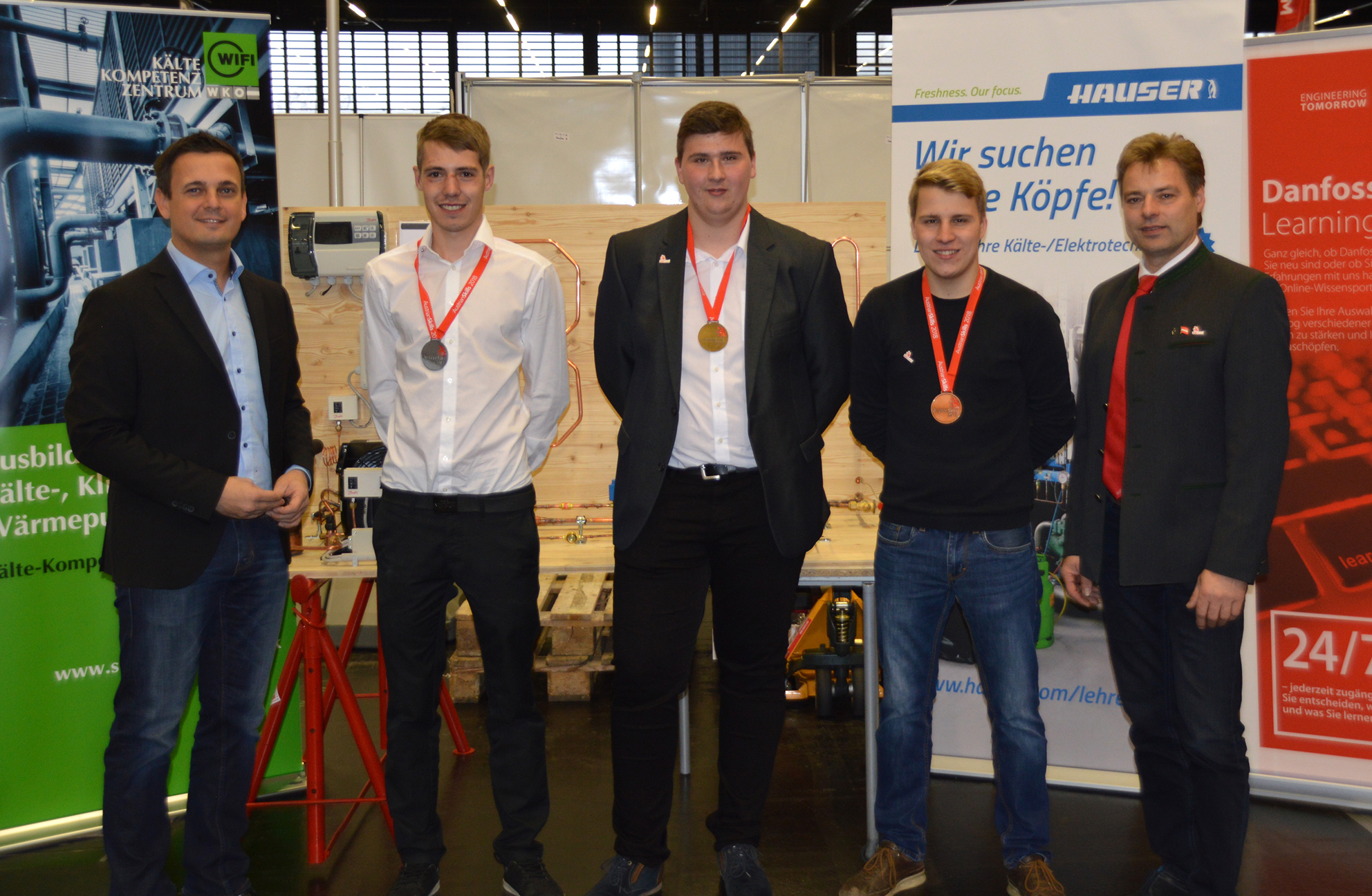 HAUSER won a clean sweep in the SkillsAustria vocational competition in the category of air conditioning and refrigeration technology. HAUSER refrigeration systems engineers Andreas Keplinger, Marco Hörschläger and Richard Lang took the top three places, while Mathias Wagner came fourth. The Austrian skills competition was held in Salzburg from 22 to 25 November 2018. Over several days of competition, nearly 400 professionals representing 39 categories convened to put their skills to the test. The winners were entered for the WorldSkills 2019 and EuroSkills 2020 events in Kazan and Graz respectively. A total of 30,000 visitors followed the happenings. “We are very proud of our skilled young professionals who achieved outstanding results through dedication and the support of their instructors,” said Sandra Tomasevic, marketing manager at HAUSER.

No fewer than four participants represented HAUSER at SkillsAustria. In the air conditioning and refrigeration technology competition, the young professionals were required to install a refrigeration system within a set period using specified materials and following an installation plan. Pipes had to be produced from copper with soldered connections, and entrants had to install the electrical technology for their refrigeration systems before the whole installation was subjected to a final pressure test.

“It was gratifying to see the high standards and the commitment displayed by our young people,” emphasised Martha Schultz, Vice President of the Austrian Federal Economic Chamber (WKÖ). “Decisions came down to the wire in many competitions. I would like to thank the 250 Austrian businesses and schools who sent us their superbly trained young professionals. In the light of their performance, we can look ahead with confidence to WorldSkills 2019 in Kazan and EuroSkills 2020 in Graz.”

As the centre for vocational competitions within the WKÖ, SkillsAustria coordinates the Austrian national championships (AustrianSkills), the winners of which are invited to represent Austria in the international EuroSkills and WorldSkills competitions. SkillsAustria is also responsible for preparing and deploying the Austrian team to international vocational competitions as well as public relations. The Austrian team is financed by the Austrian Economic Chambers, the Federal Ministry for Digital and Economic Affairs and the Federal Ministry of Education, Science and Research.

EuroSkills, the European vocational skills contest, was first held in 2008; its format is based on the international WorldSkills vocational championships. The aim of the European skills showcase is to promote young professionals while raising the profile of Europe as a place to do business. At the last EuroSkills event – in Budapest in 2018 – Austria emerged as the second most successful nation in the overall rankings with a total of 21 medals, including nine awards for excellence.